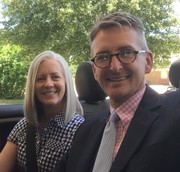 Justin is our Youth Pastor

Justin grew up right down the road in Daingerfield, Texas. As a high school freshman, Justin’s spiritual journey began at a 5th Quarter Pizza Party at FBC Daingerfield where he first realized his need for Christ. After graduating from high school, God led Justin to East Texas Baptist University where he earned his Bachelor of Arts degree in Religion with an emphasis in Youth Ministry.

While attending ETBU, Justin met his wife Grace who is now an elementary school teacher at LKCISD.

Justin was called to FBC Linden in March 2011. His ministry philosophy is that “people don't care what you know unless they know that you care” and his belief that God made us for community in Him and through Him leads to his pursuit of very personal relationships with his students and parents.

In case you couldn’t tell from his picture, he and Grace are Dallas Cowboys fans through the wins and the losses. And just to confuse the rest of us here in the South, he’s a Dallas Stars & Pittsburg Penguins NHL hockey fan.